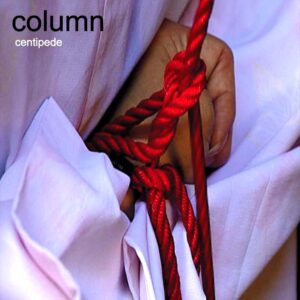 Column singer Janine Neble has been, since the early 80s, one of the Danish underground music’s most overlooked figures despite the fact that she holds one of the country’s finest and most faceted voices. Proto-goth band Alive With Worms album debuted only after 15 years of existence and an otherwise promising project in New York, Maria Ex-Communicata, did not result in a lasting career. The third time may well be lucky. With Column project she moves, in the company of guitarist Nino Orio and programmer Flemming Davidsen, in an exciting new direction, combining her fascinations of sex, life and the dark side (the front cover shows a sex slave tied up in the “Centipede form”) and the great, gloomy music tradition with a big beat and EBM-inspired sound. On the catchy, but not striking commercial single, Piece of Glass, plus the songs Lullaby and Trash Boy, we get both her dark fantasies and huge voice register which from line to line can change from heavenly vocals to awe inspiring against a selection of extremely efficient electronic backgrounds. You have to marvel somewhat, that so great a voice is used so sparingly on Centipede. The rest of the material is, with one exception, primarily an instrumental affair.

Not that this holds back the album in any way. As Carbon Hill demonstrates, Orio and Davidsen are masters in creating disturbing and fascinating listening experiences with a piece of uncommon cinematic twilight music with rugged drum samples and layers upon layers of suggestive guitar sounds. And when take the album as a whole, one is left with both invested and completely released, even if it draws its expression around styles that have seen their best days but nevertheless still seem fresh and addictive. The album ends with the song Mother, a real tour de force from Nebles side. it is so beautiful and delicate that you would have to be totally cold and unemotional not to be just a little bit touched. And so draws to a close, what is already one of the year’s best Danish albums.